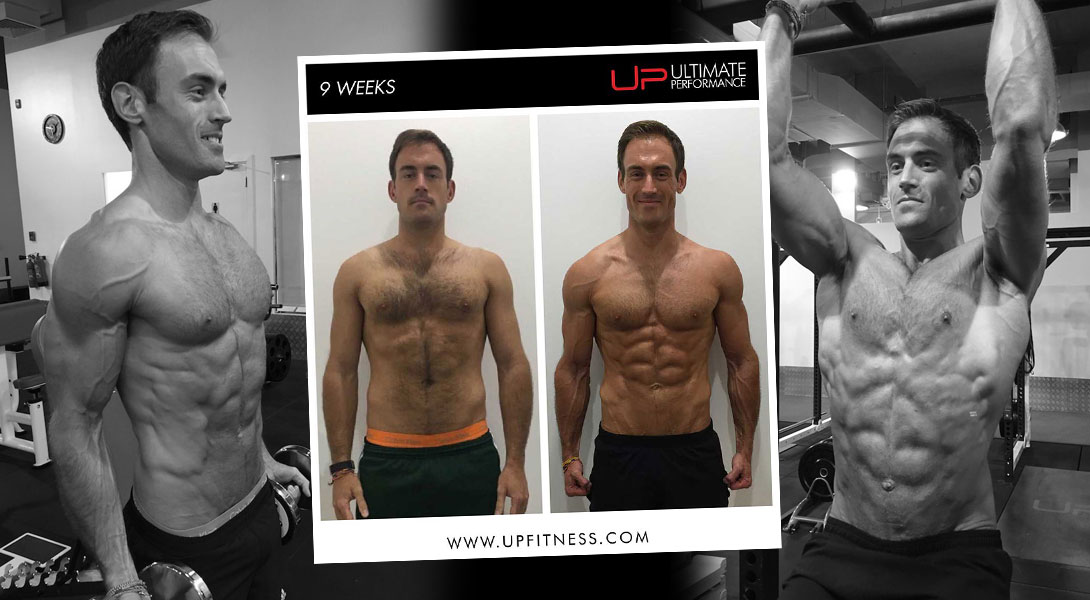 Sheridan Got Shredded for His Wedding in 9 Weeks

Sheridan wanted to get in the best shape of his life for his wedding – and he had only nine weeks to prepare.

He had trained for years but a bout of dengue fever after a trip to India followed by training for the London Marathon had meant he lost a lot of weight and was left with a 'runner's body' lacking any real muscle definition.

"It's my wedding in a week so I knew I had a nine-week period to get myself in shape and looking the best I could to feel confident flying home to the UK to be with friends and family and being up in front of them."

The results of his nine-week body transformation have been nothing short of spectacular. 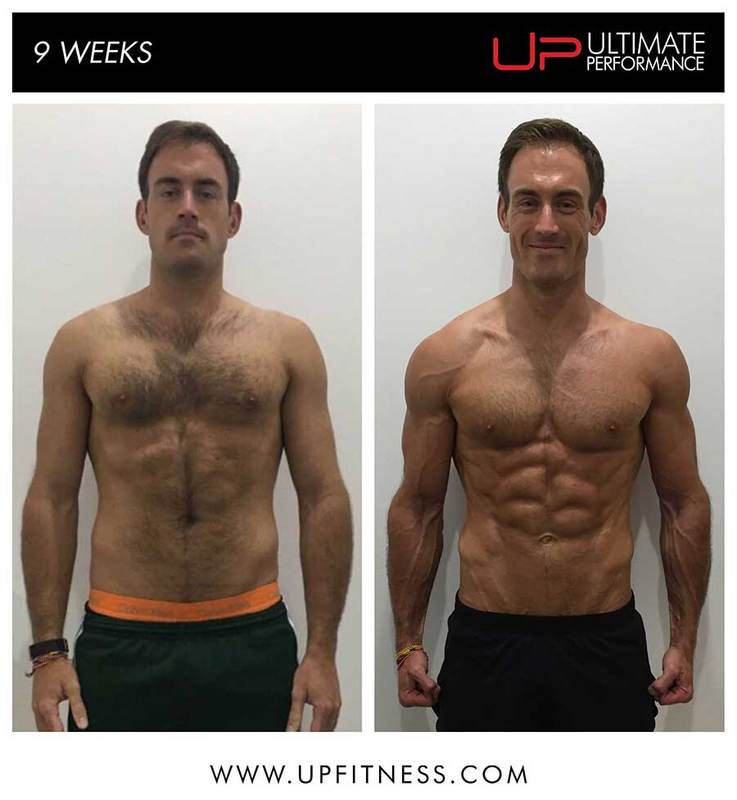 Small tweaks to his already-healthy diet on his bespoke UP nutrition plan made a huge difference to his physique. Not just that, but his focus and drive in the office improved with his new diet, making the mid-afternoon office slump a thing of the past. The quality of sleep he was getting improved too for the first time in years.

"For me the biggest change was noticing that I didn't have an afternoon carb slump. There was a big shift in the plan my trainer Blair put me on from
carbs, which translated to me feeling energised throughout the day and not finding myself getting to 3pm and feeling as though unneeded an espresso to perk me up.

"Following on from that, another big change was seeing my sleeping patterns improved. I've never been a great sleeper ever since I
started work and left university. I would typically average four or five hours a night.

"Suddenly I was going from that, just four or five days after starting the programme and changing my eating habits, to getting a consistent six and half or seven hours."

Now Sheridan can step out with confidence on his wedding day in front of friends and family with his new lean, muscular physique.

Here he explains how he took his strength, health and fitness to the next level in less than three months… 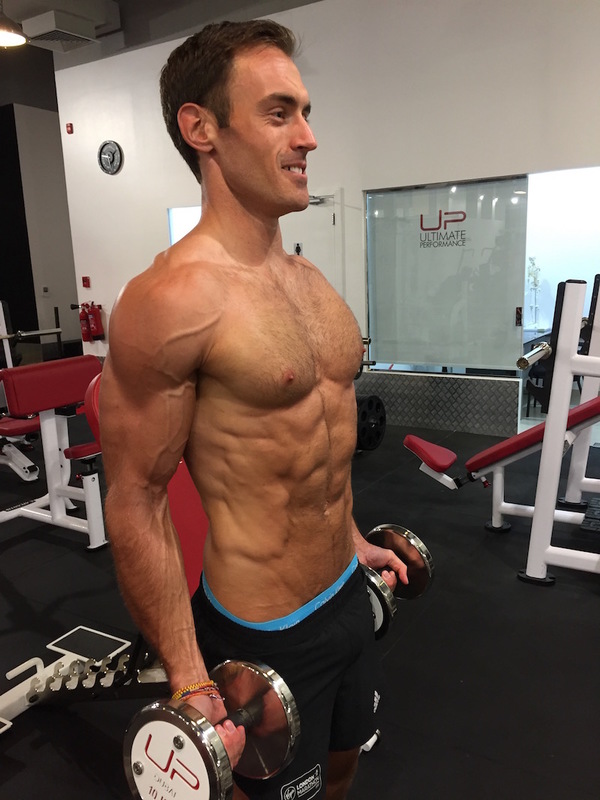 ARRANGE A COMMITMENT-FREE CONSULTATION AT YOUR CONVENIENCE

I'd been aware of UP Fitness for a number of years and had considered training with them when I was living in London; however, the opportunity never arose. This meant that I had seen the transformations that had been achieved in the past and hoped that I too would be able to achieve similar results.

My motivation for training with UP Fitness was two-fold. The first, more immediate factor, was that I wanted to ensure that I was in the best shape for my wedding.

The second, longer term factor, is that both my father and grandfather have suffered major heart attacks and required heart surgery as a result; accordingly, I am keen on ensuring that I keep myself as fit and healthy as I possibly can in my twenties and thirties to try and mitigate any hereditary heart issues that are lurking on the horizon.

Can you tell me how you were feeling both physically and mentally before starting the 9 weeks?

I was feeling good. The week before I started I ran the London Marathon and had been training for that for the previous four months. The training regime meant, however, that I had neglected any proper gym training for a while. In October 2016, I had reached a point where I was the strongest I had ever been and heaviest (at around 102kg), but after taking my fiancée to India for her 30th birthday I caught dengue fever and the three weeks it took to fight it meant that I dropped weight rapidly.

Allied to four months of running, by the time I started at UP my weight was hovering at around 91kg. With the lack of weight training, whilst I felt physically fit and was able to step out of the door and run half marathon distances a couple of times a week, I had lost any definition and, as the first week at UP proved, strength I might have had previously. 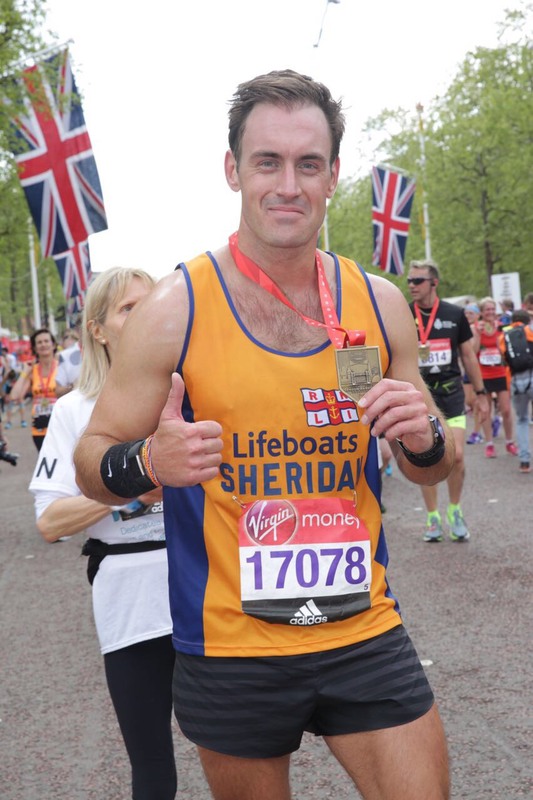 What was your diet and lifestyle like before you started the 9-week programme?

Generally very healthy; I had chosen to be teetotal during my marathon training and don't really drink heavily in any event. As a couple, we enjoy cooking and this meant that we had a varied diet. Retrospectively, I suspect the issue was portion control; I tended to pile big portions on my plate. This experience has shown me that my portions for my macros should be much smaller.

Also, I suspect as a result of the marathon training, I had found myself craving carbs and sweet foods; this meant that I had got into the habit of having a couple of biscuits a day in the office.

How did your diet and lifestyle change when you started the 9-week programme?

As set out above, there were minor changes. The starkest was understanding the macros I need and the portion size that translates to. After the first week, I also found that I adapted quickly to the change and was able to curb any temptation for the biscuits in the office.

Having said that, mid-way through the programme I did have a blow out when I was taken away for my stag do; however, the effects of this were anticipated through my discussions with Blair and allowed for. 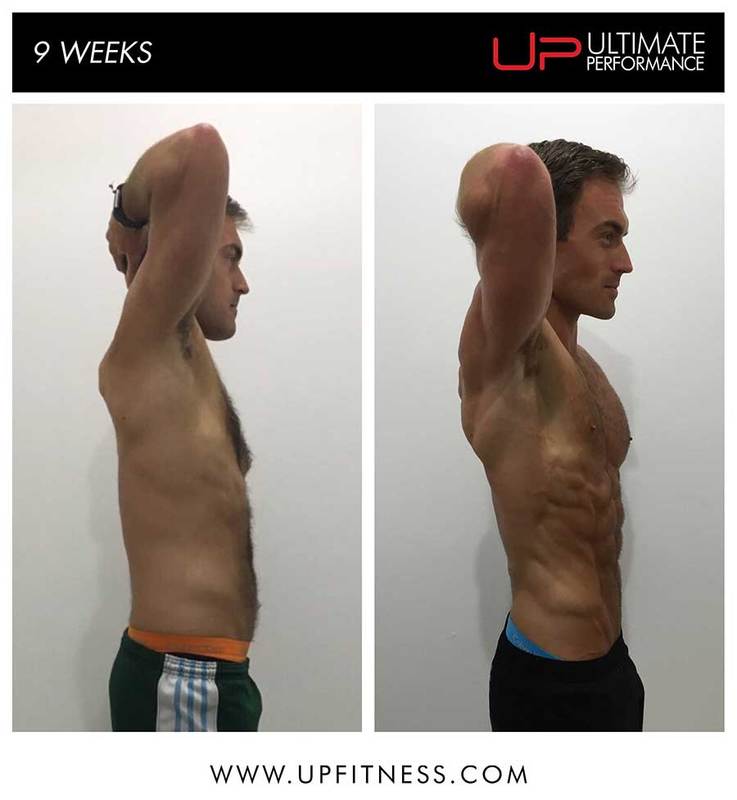 What effect did this have on your health, performance, lifestyle and energy inside and outside the gym?

I noted from the outset that my digestion improved massively and, unlike before, I didn't find myself having a mid-afternoon slump. The meal preparation was easy (most likely because I outsourced it to a company specialising in such services) and my fiancée and I continued to use cooking the evening meal as an opportunity to de-stress from the office, but now with an understanding of the macros needed for the meal.

I have always been a terrible sleeper; however, over the past nine weeks I have noticed a difference and regularly get an unbroken seven hours (something I hadn't believed possible for so many years).

How did you find the training and did it fit around your busy lifestyle?

I really enjoyed the training. It was easy to fit around my lifestyle; I am a morning person and chose to have all of my sessions at 6:30. That made it easy to put in the diary and ensure that I never had an excuse to miss a session.

Blair was excellent at motivating me during each session and understands what makes me tick as a person, so he was able to use that to help me get the final few repetitions out of each exercise for maximum results.

I've been weight training for 14 years and worked with various S&C coaches during that time, but the most impressive thing for me about the training and coaching I received from Blair was the focus on form – ensuring that every exercise resulted in the maximum benefit as it hit the target muscle without the load being transferred to some compensatory muscle. This was a particular challenge for me as I am carrying various rugby-related injuries that have led to me subconsciously shifting loads from my shoulders to protect the weakened muscles. 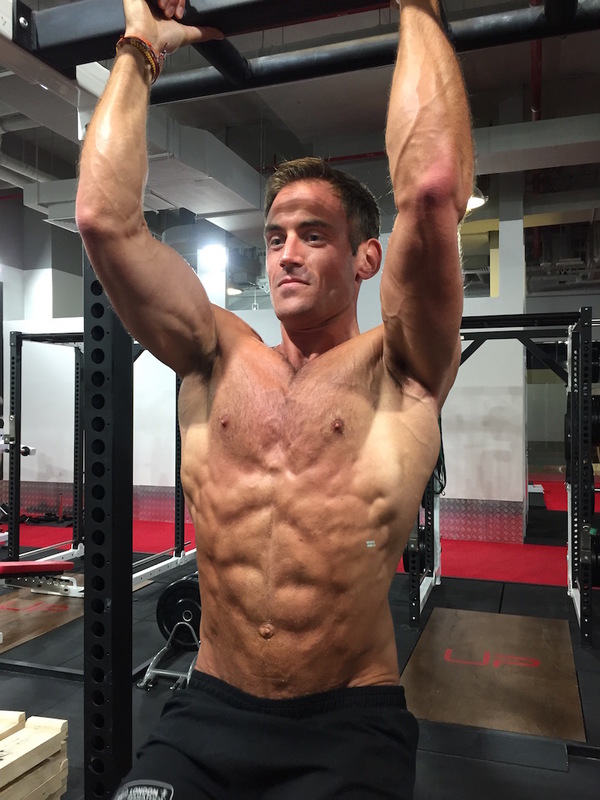 The results far exceeded my expectations. When I started at UP Fitness, I was 11.5% body fat and set myself the goal of being sub-10% by the wedding. Within two weeks, I had hit that target and could visibly see the results. Blair ensured that we did assessments every fortnight and took progress photos, which meant that I had tangible proof of the changes and results I was getting from the effort I knew I was putting in.

This meant that I had the carrot of the progress I could see along with the stick of wanting to see just how much I could achieve to drive me on in the final few weeks.

It was also encouraging to see the weights shifted going up week-on-week despite my body weight dropping. I must admit, I was concerned when the body weight dropped below 86kg; I'm not sure the last time I was this light, but I feel fitter for it.

What were the most important things you learned during your 9 weeks and what really worked for you in helping you make your transformation?

The biggest changes for me related to understanding exactly how much I need to eat during the course of a day and how to ensure I focus on the muscle I'm working rather than the movement and weight itself.

Blair was excellent at getting the tough last repetitions out of me on every exercise; encouraging me when needed and pushing me as well. When I've trained on my own, it was those tough few repetitions that I would previously have avoided and that is where someone like Blair can really make a difference. 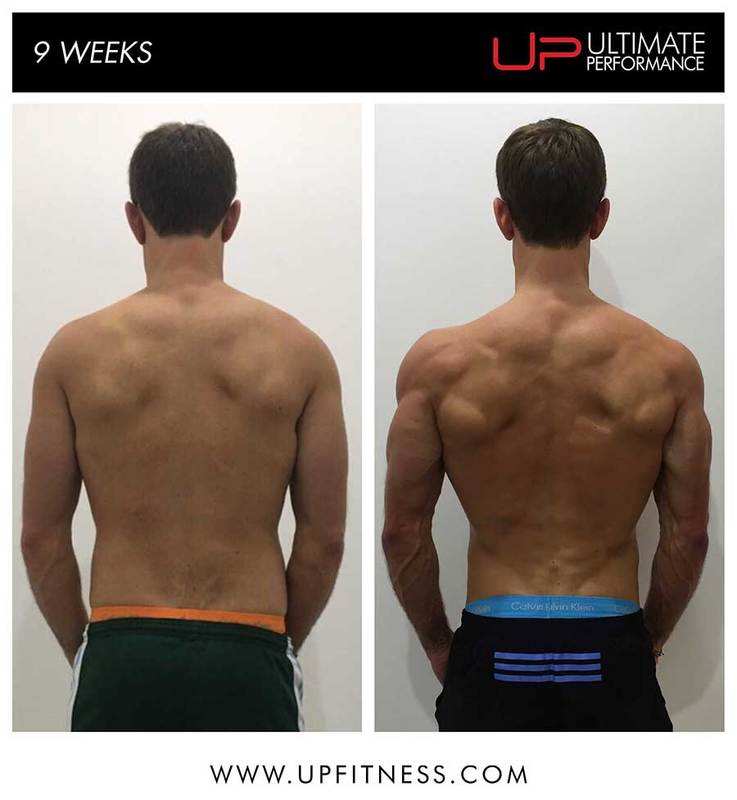 How has doing this transformation changed you and do you think it will benefit you going forward?

Looking at the photos from before and after I have been surprised by the change. I have always considered myself to be a healthy and active person; always playing sport of some sort and regularly training in the gym three or four times a week. But the change achieved in nine weeks is huge and just shows that training hard with focus makes a massive difference to going through the motions.

Definitely; the simple fact is that I would not have achieved the results I have over the past nine weeks if I had not been pushed by Blair. The set-up and the attention to detail is second to none and it feels as though the team at UP will match your efforts to help you achieve your goals. It means you can have no excuses if you don't achieve your goal.

Ancillary to that, the atmosphere in the gym is great; the fact that the rest of the trainers at UP were so personable and encouraging really makes a difference.

The fact is that the sessions are expensive, but it is money well spent if you want a no excuses environment in which to achieve your goals.

If you want to get maximum results in minimum time like Sheridan, speak to us about our Personal Training Plans and BOOK A CONSULT NOW. 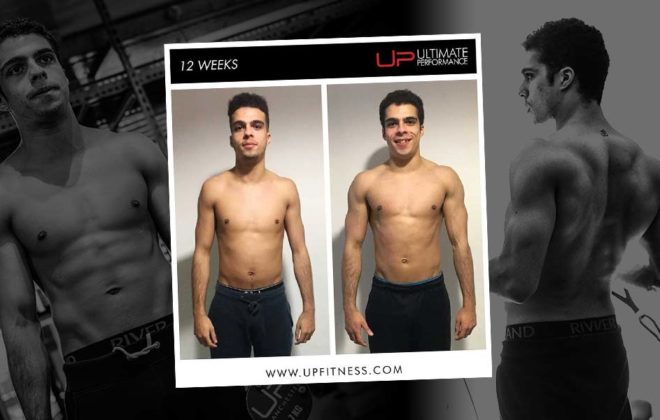 Chris Bland- I Transformed My Body In 12 Weeks 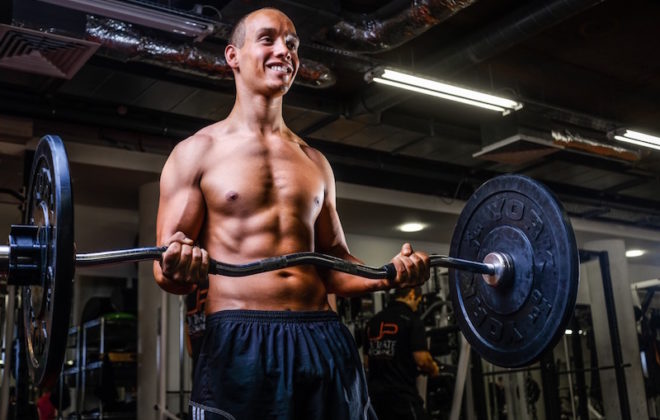