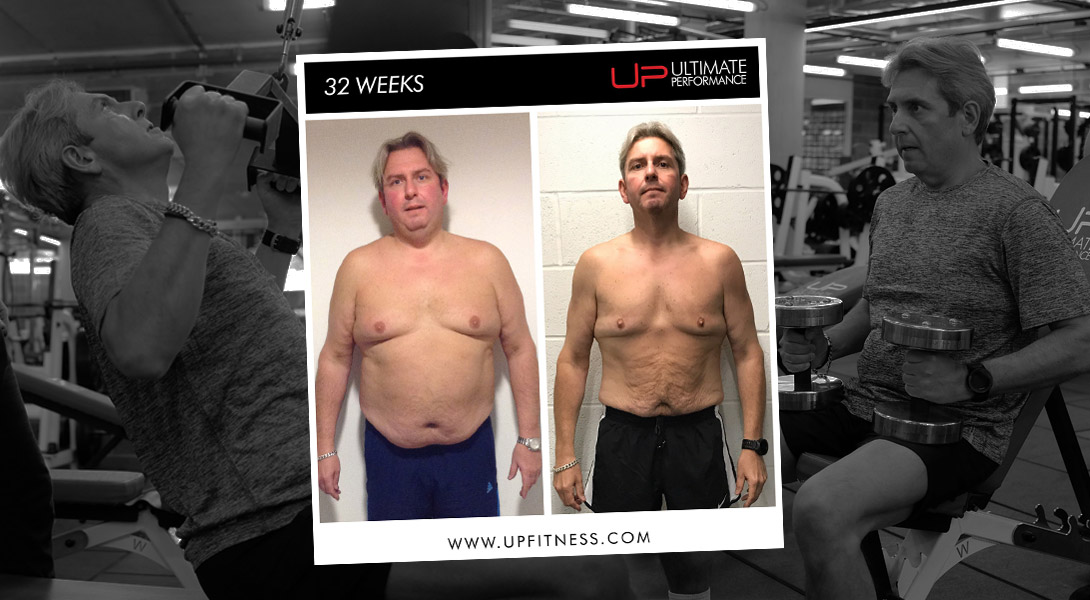 How Chris Lost 29kg & Got Fit Again After His Knee Surgery

A keen runner who was told he was ‘too fat to run’ by doctors has completed an incredible 30kg weight loss transformation.

Chris was advised by specialists to join a gym and lose weight after tearing cartilage in his knee and undergoing knee arthroscopy surgery a year ago.

With his weight and his knee damage stopping him running, Chris came to Ultimate Performance to make big changes and get back in shape.

Now he has lost almost 30kg, strengthened his knee, and he’s back running faster than ever.

Chris has shaved an incredible two minutes off his 10km personal best time thanks to the strength and conditioning work he has done alongside his UP personal trainer. 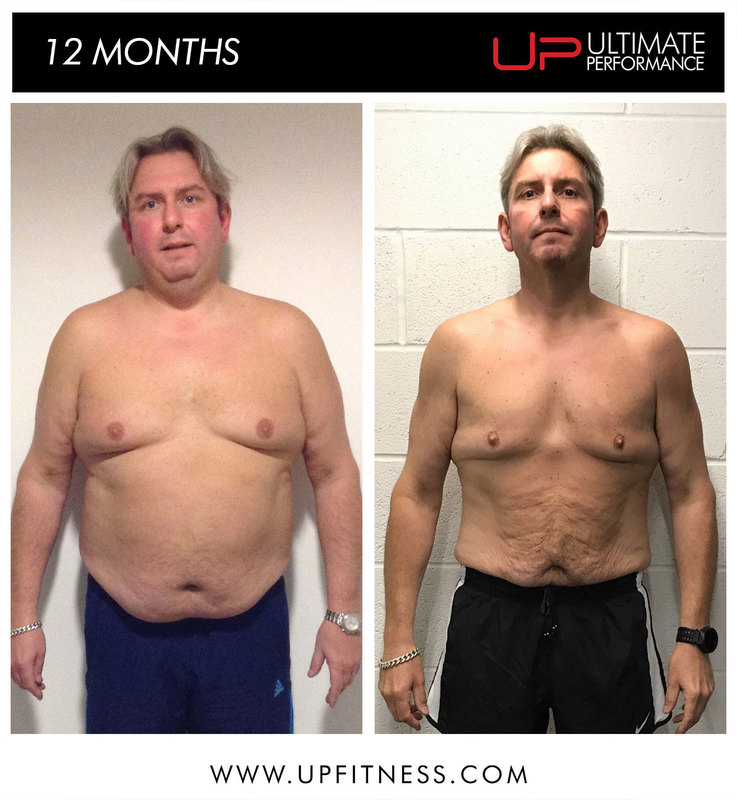 FIND OUT MORE ABOUT OUR PERSONAL TRAINING PLANS HERE

“The results I’ve achieved – straight away there’s a physical change: you look different.

“I’m fitter, I’m stronger, and a lot leaner, and for me running was an important motivation for me to start training and now I’m quicker than I’ve ever been.

“I feel stronger when I’m running; I can run longer, and I can run faster.”

Now Chris is in the best shape of his life at 48 – and he’s back running. But just 12 months ago, it was a different story.

Chris’ knee injury and subsequent surgery had put him out of action.

He felt he couldn’t train and his specialist advised him not to run – and soon bad habits crept in, and the weight began piling on. 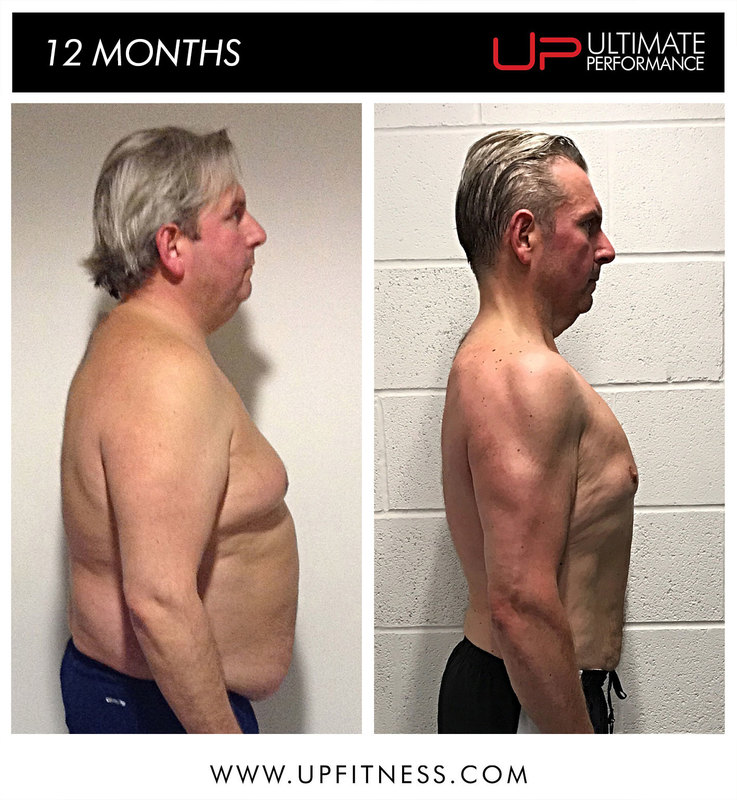 “Before coming to UP, I did a lot of running. I tore cartilage in my left knee, which resulted in knee arthroscopy. So I had surgery to repair the knee cartilage.

“I thought running was the be-all and end-all for me. I didn’t want to swim; I’ve got a bike, and I don’t mind the odd mile cycling, but it’s not something I enjoy. I enjoy running.

“So when he told me I couldn’t run, or that I was too fat to run, the realisation was there that I’ve got to do something to help this knee.”

The specialist advised strengthening his legs and warned that any further knee damage might not be able to be treated.

“I needed to come to a gym to train to build my legs. That was my main motivation to come back to UP.” 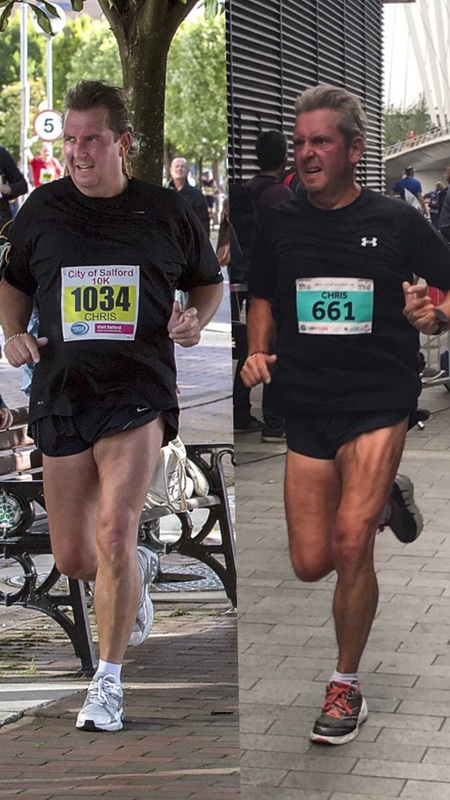 BOOK YOUR FREE UP CONSULT AND START YOUR TRANSFORMATION TODAY

But another catalyst for starting his body transformation process was wanting to get back in shape after seeing photographs of himself, which hit home.

“Before I started at UP, I’d got myself to a stage where I was probably at my heaviest.

“Day to day you don’t notice it yourself. My wife and daughter may have mentioned ‘when are you going to train again?’ Or ‘you’ve put a bit of weight on’.

“Because you’re busy, it was the last thing on my mind. I was happy in myself.”

There were two pictures in particular which compelled Chris to take action.

“The first one was a golfing picture, which prompted me to get back into my running again, which up until the injury, was fine.

“Then the second picture was Lucy’s 18th. That was the picture that prompted me to think ‘yes, there is a problem’.

“When you see a picture, pictures don’t tell lies. You see yourself as other people see you, not as you imagine how people see you.

“Sometimes it takes a picture in the cold light of day to kick you into action.” 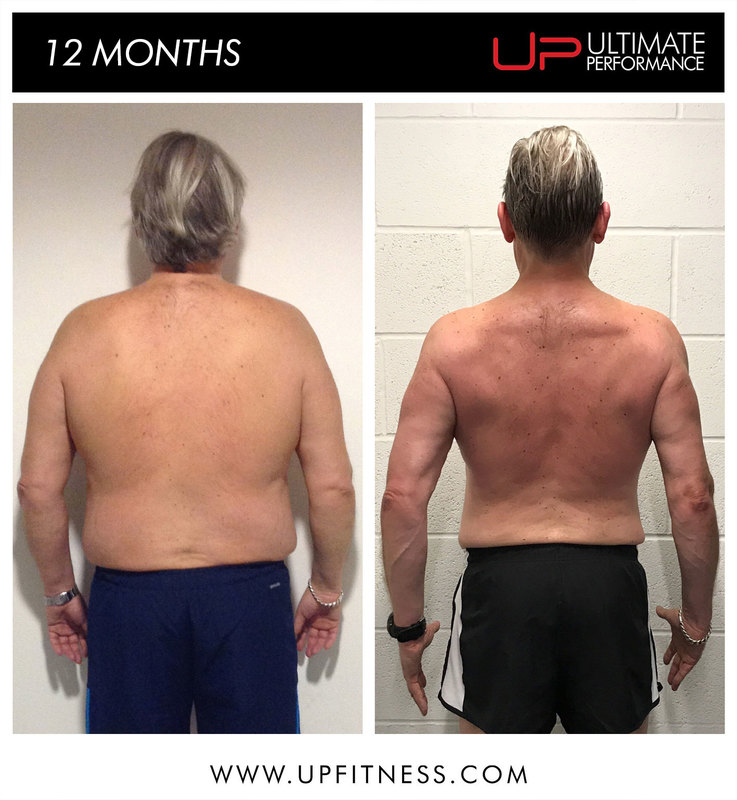 Chris had fallen into bad habits over a 12-month period and wasn’t training at all.

A busy work life meant healthy eating was often replaced by takeaways and a bottle of wine or beer in the evenings.

“Day in, day out, that habit takes its toll. There comes a point where you’ve got to take stock and think ‘this isn’t right’.”

Coming to UP was the catalyst for change that Chris was looking for.

He explains that from the moment he began working with his PT his body and his fitness began changing.

“I have to be honest; I could probably see results in the first week.

“You train three times a week, by the third session in, you could feel there was a difference.

“But straight away I had lost weight. I’m almost 12 months in now, and I’ve lost almost 30kg.

“But at the start, I was probably losing at least a kilo a week. People may think is too quick, but I’m 12 months in, and I’ve maintained that.” 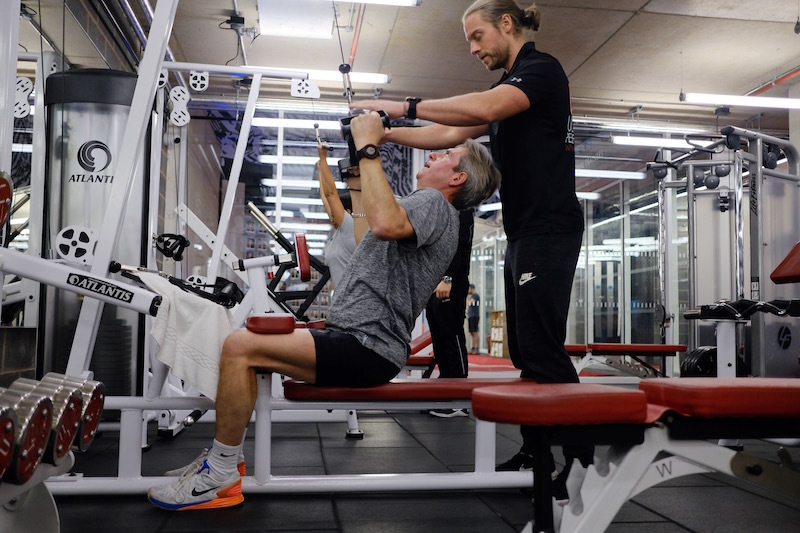 ARRANGE A COMMITMENT-FREE CONSULTATION AT UP TODAY!

It was hugely satisfying for Chris to see his body changing before his eyes and feel like he was getting fitter and stronger.

“To see results that quick, motivates you and keeps you motivated.

“You think if you’ve only been here for a relatively short time, and you’re losing weight and you feel like you’re getting fitter and stronger, let’s keep it up. It’s self-motivating.”

Chris was training in the gym just three hours a week and doing some extra cardio work on his own to build up his fitness.

The structured programme helped him progress with his knee very quickly.

For the first three months, Chris started off walking to help get active again and speed up fat loss.

Over time, he built up strength and was able to begin running again. 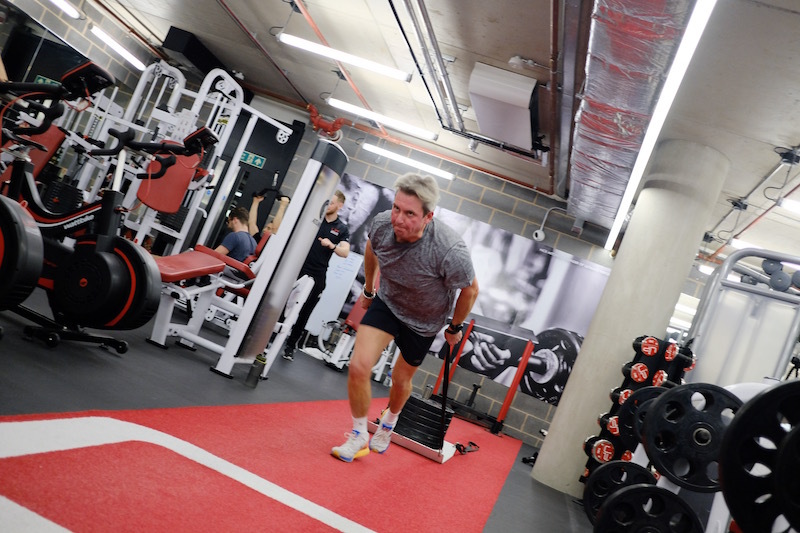 “Then by early March, I was back into running and that was based on the work I’d done here at UP.

“As a result of that, I’m now quicker than I ever was.

“I just finished the Salford 10k. I got a PB this year – I knocked two minutes off my old PB.”

Lifting weights wasn’t something Chris had done for many years – and not something that he thought could get him the weight loss results he has achieved.

But having a structured programme around diet and training helped reach his goals.

“The impact weight training has had on me is a definite change in physique.

“I’ve got definition where I need definition, but my ultimate aim was to get stronger legs to help me protect an injured knee to help me get back running. 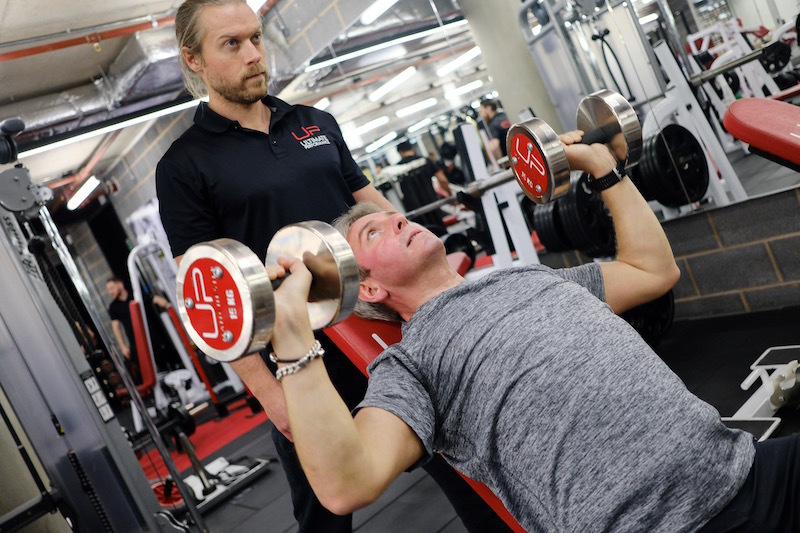 Chris might be a runner at heart, but he has developed a new-found love of lifting weights.

“My mindset has changed about training. It’s a long time since I’ve trained in a commercial gym. But I’ve never trained as consistently as I have here.

“Wanting to train at UP and wanting to maintain at UP, it keeps you going. It’s addictive.

“I’ve always been used to the runners high, but that endorphin rush when you’ve finished a hard set, and you go to get changed, you’re ready and fired up for the next.

“Sometimes I’m quite impatient. I wish I was training every day, but I can’t.” 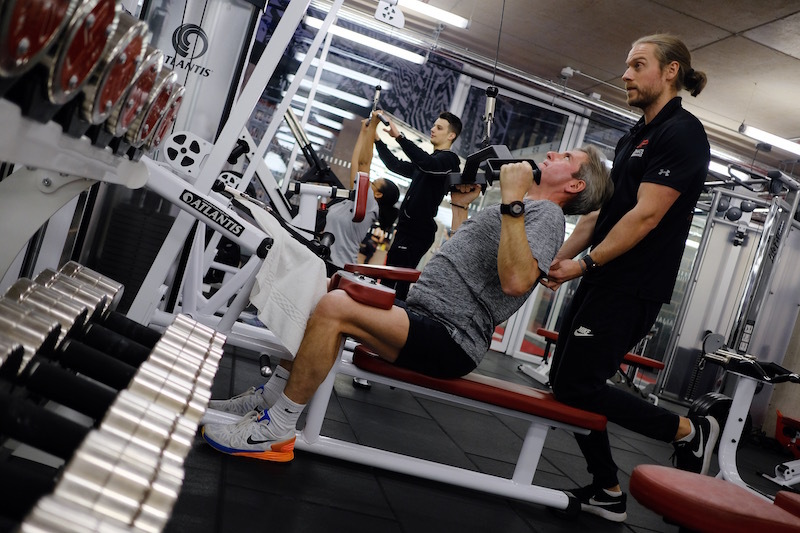 The training Chris has done at UP, and the education he has developed around diet and lifestyle has made a big difference to his life outside the gym too.

“Being at UP does have improvements on your life outside the gym because it’s not just training at a gym. It’s a lifestyle change.

“You know that training all week, working hard and keeping on point diet-wise, if you go out and have a big party weekend, you know it has a big effect on the scales on a Monday morning.

“So you think before you do, be that when you order your extra drink at the bar or food choices in a restaurant, it makes you think.

“The way I used to think was ‘I’ll throw another mile in and reward myself with another pint.’ Now you’ve got to make better choices.” 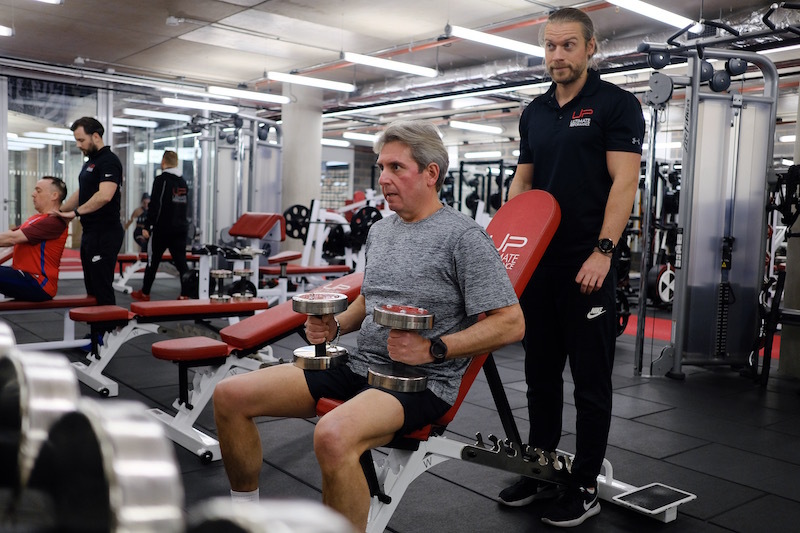 Chris thinks back to the day he came through the door at UP and saw the famous results wall with dozens of successful clients proudly displaying their ‘before’ and ‘after’ results.

It’s something Chris wasn’t sure was even possible. But now he has experienced it first hand.

“Other people may not believe that the results are possible. But use me as a case in point. I’m coming up to 12 months training with UP, and I’m 29kg down, fitter and stronger than ever. The results are achievable.

“You just have to work hard and maintain. You will get all the help and support from the guys at UP, but ultimately it’s how hard you want to push yourself and get those results. Anything is possible.”

READY TO GET REAL RESULTS LIKE CHRIS? TELL US YOUR GOALS 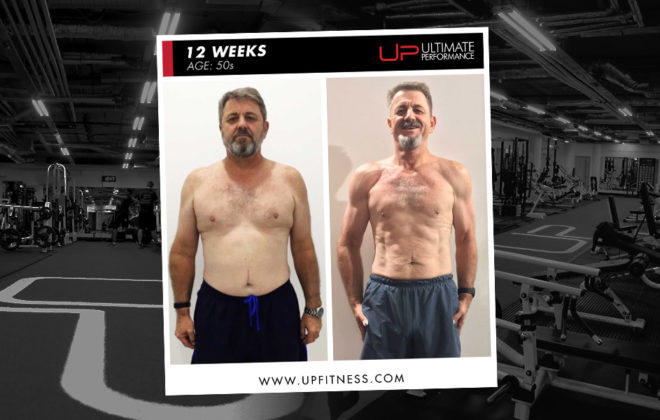 Jurgen Lost 20kg and Cut His Cholesterol in 12 Weeks 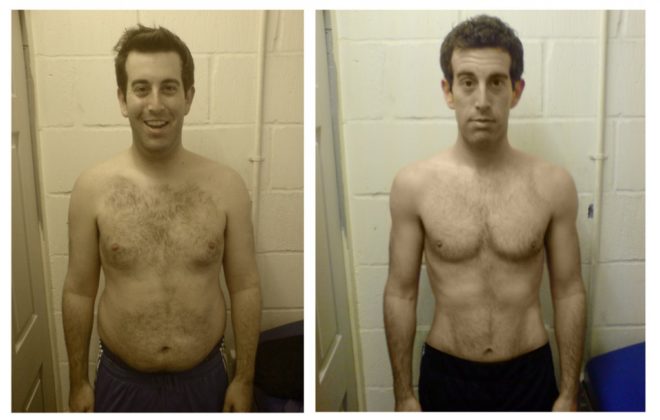 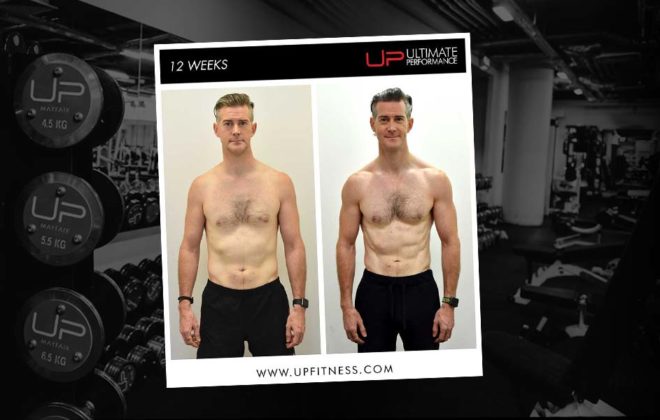 Nathan Made 4 Diet Changes to Get This Incredible Body