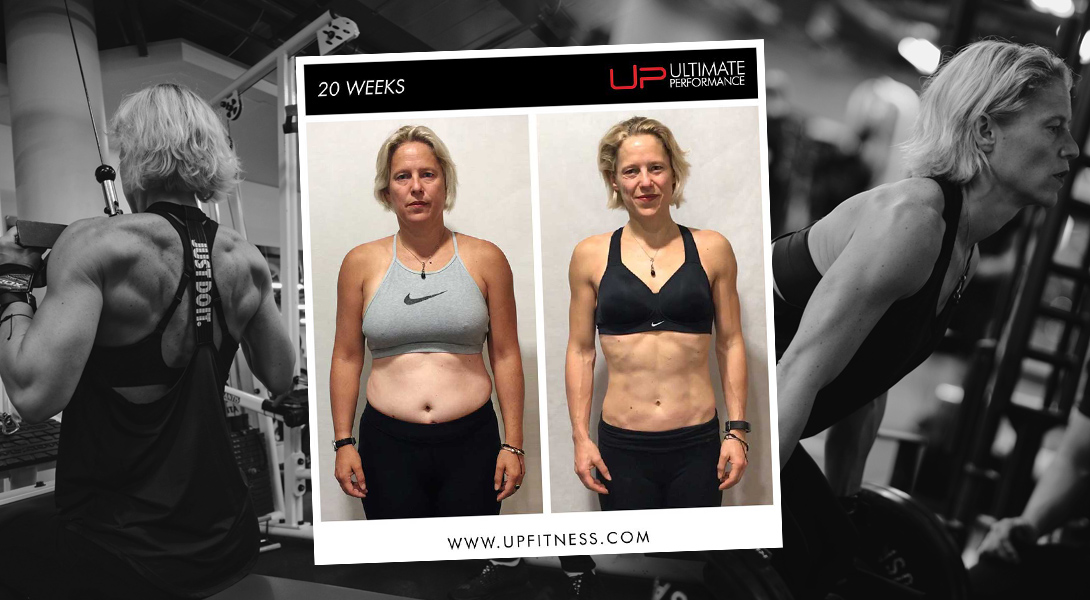 So many women spend their whole lives trying to lose weight and get the figure they want.

Vicky was the same before she came to Ultimate Performance – constantly wishing she could shed some pounds and get in shape.

But after vowing to herself that she wouldn't fade away into 'middle-aged frumpiness', she has completed an incredible transformation in just 20 weeks – losing 40lbs (18.5kg) and getting in the best shape of her life.

"It's amazing. It's totally transformative. It feels like I've got my life back.

"I don't think I've ever had a body shape as good as this – even as a teenager.

"I've got a six-pack now which I've never had in my life." 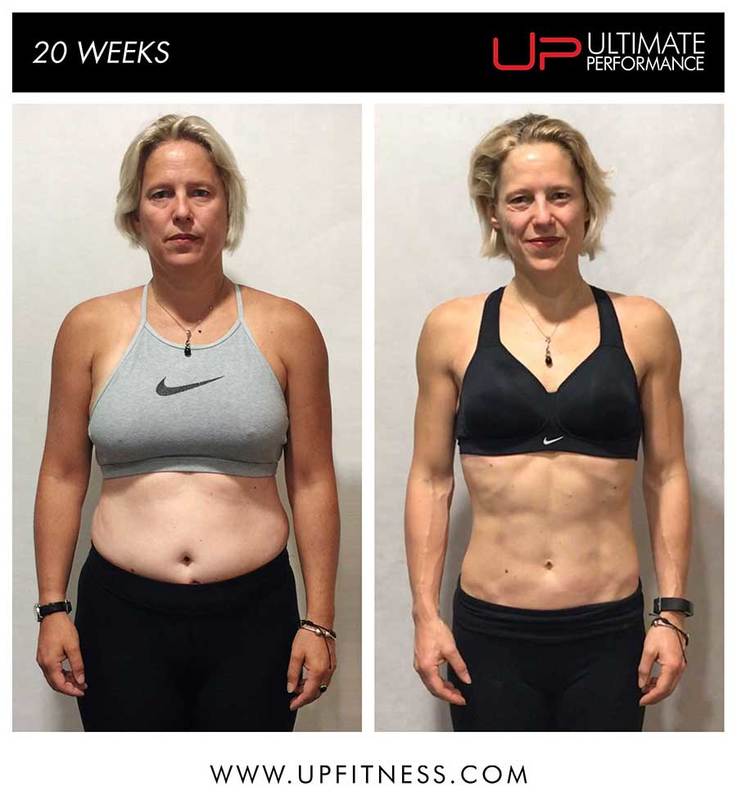 The Chief Information Officer explains that feeling fitter, stronger and more confident than ever has changed her life.

"That affects your body confidence. I can walk into shops and not worry about trying on clothes for the first time ever.

"But that also spills out into your overall sense of confidence and self-esteem.

"It gives me the confidence to try new things – like a survival weekend in Wales.

"I don't feel held back anymore. It's extraordinary what a difference that makes."

The difference this has made to her body, her health and her mindset is incredible.

It stands in stark contrast to how she felt before walking through the doors at UP to start her transformation journey.

"I was in a bit of a rut," she explains. "I had got into some really bad habits. I wasn't eating properly, I wasn't sleeping very well and I was drinking way too much and I went on holiday with some friends and rather than coming back refreshed, I actually came back feeling low on energy.

"A friend of mine on holiday had told me that he'd tried Ultimate Performance and he looked completely different.

"I thought 'I've got two choices: either I let myself fade away into middle-aged frumpiness and invisibility, or I give this a go.' And I hadn't tried anything like it before."

What Vicky was looking for wasn't just to improve her physical appearance – but she says it was more a wholesale lifestyle change.

She worked long 70-hour weeks, got very little sleep and eating a healthy diet wasn't even on the radar.

Speaking about her old lifestyle, she explains: "It was so bad. I typically get quite anxious about my work. I also work quite long hours. I got into a habit of working really late, drinking before I went to bed and then waking up anxious and worrying about work and then actually not eating until 2 or 3 o'clock in the afternoon.

"Then eating wasn't a priority, so I'd eat badly.

"So too many snacks, not enough proper meals left me feeling low on energy and actually a little bit toxic. Your skin doesn't feel very good, you look a bit grey and quite jumpy and anxious." 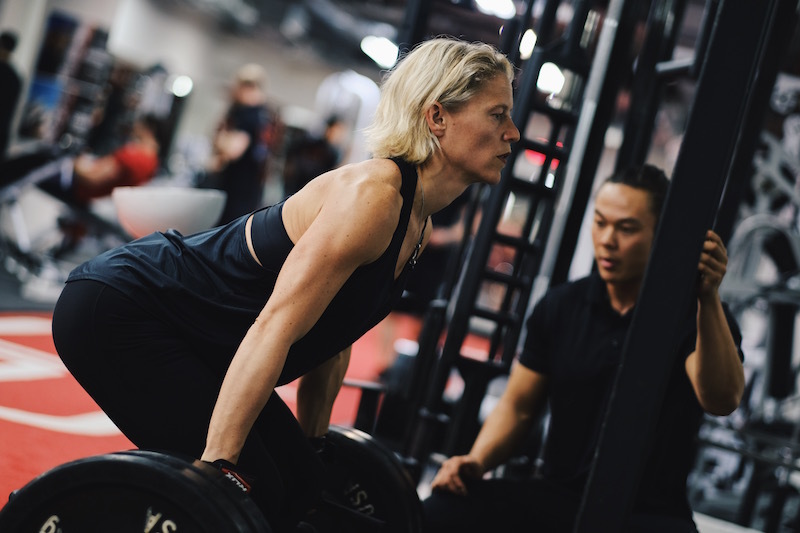 But from the moment Vicky started working with Ultimate Performance this all changed and it marked the start of a profound shift in her lifestyle and health that she wanted.

"For me, actually one of the biggest parts of the process has been changing my relationship with food in quite a fundamental way.

"My eating habits are just so much better now.

"I wake up early, I eat breakfast at 7 am and by 9 am my stomach is rumbling.

"I really noticed that rather than my energy levels being really down, I actually felt much more energised and much more up for it.

"It's a completely different world."

Working with her personal trainer at UP to optimise her food and nutrition has been an education for Vicky. 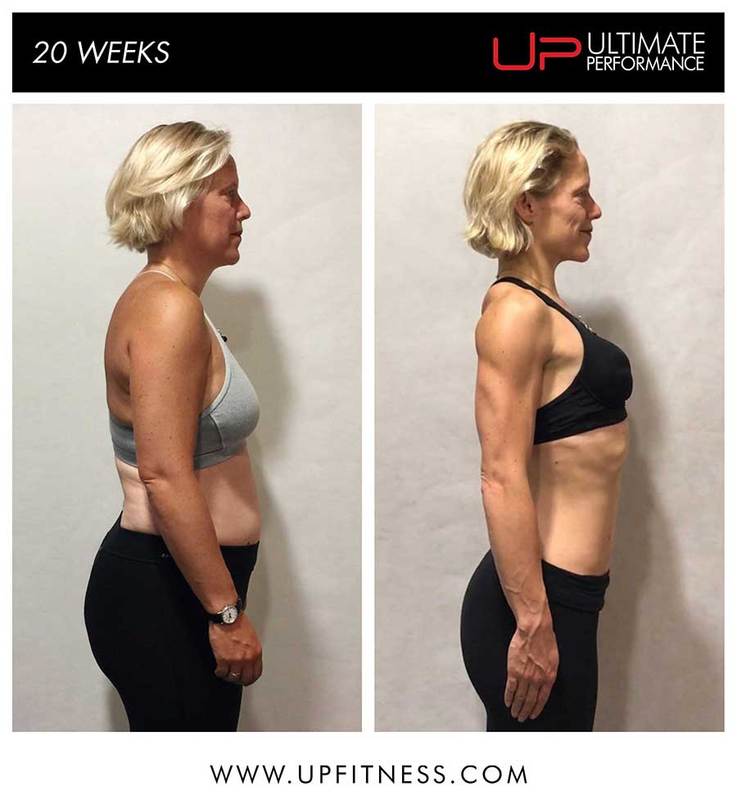 But rather than being a 'calorie counting' diet that she feared, it has helped her get control of her diet and find that healthy balance.

"I've always had a problem with the idea of going on a calorie counting diet.

"When I see people going on those kinds of things actually they become obsessed about food, they're hungry all the time, they are low on energy and as soon as they're finished they just start eating again.

"I've always been worried about that –  but that's not what this is.

"I have been able to carry that through to social occasions so if I'm out at a party and there's a big cake, I can have a bit of cake – it's not going to kill me. I don't do it every day. In a way, it's been quite liberating." 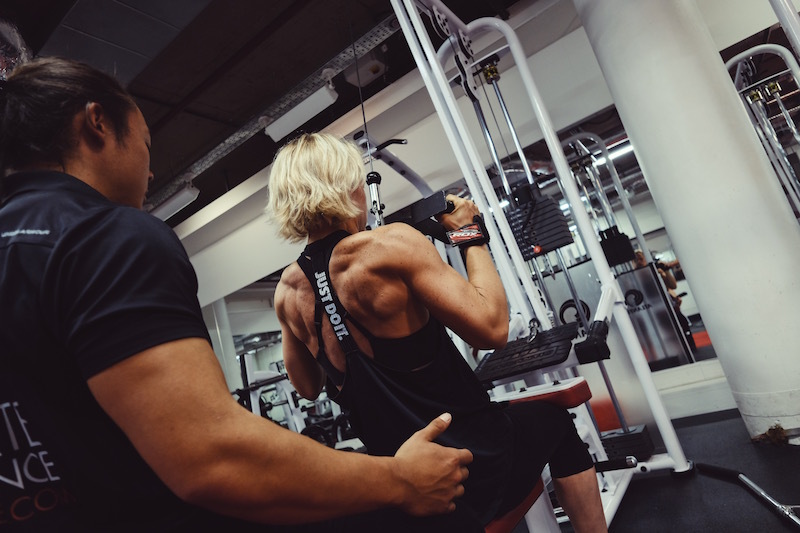 "When I started here, the very first weight in I was really horrified. I didn't realise it was that bad.

"I was almost 84kg. That's the biggest I've ever been.

"In the first few weeks, the weight came off very fast. Every couple of weeks there would be a very visible difference to the previous time.

"So, in the early days, I was just losing kilos hand over fist."

It's incredible what can be achieved with some consistency, hard work and dedication on training and nutrition – and Vicky is proof of this.

Seventeen weeks is all it took.

"I've spent my whole life thinking 'I'd love to lose weight. I could never lose weight.' Now my focus isn't about losing weight which is amazing.

"Now I can say to myself 'I'm pretty lean' and I don't need to lose any more weight. It's a lovely thing to be able to say."

Vicky says the impact of her transformation has been far reaching.

It's not just lifting some weights and looking a little better, like she first thought.

It has touched areas of her life she never expected.

"When I think in general my levels of anxiety are much much lower. My sleep pattern has changed, so I get in bed and I'm asleep in 10 seconds.

"It used to take me hours to get to sleep.

"I think I'm more relaxed in general. My outlook on life is a lot more positive." 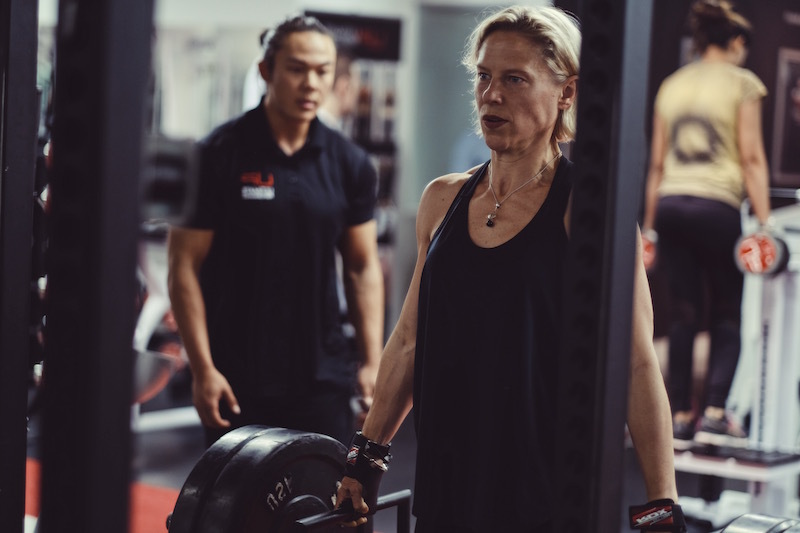 Confidence and self-esteem are a very powerful thing – and it has made Vicky much more out-going.

"I'm just up for things now more generally. Whereas before I was in a bit of a rut, I was feeling like I was going nowhere.

Now I'm going on 50-mile cycle rides on Sunday. Last weekend I did an adventure weekend in Wales, camping out in a forest and climbing some mountains.

"I've got much more time for my friends. I'm planning a big birthday gathering.

"I'm doing lots of things. I'm much more active than I was before because I've got much more energy to do that."

But the one thing that Vicky has really noticed a change in over the 20 weeks is mental strength, toughness, and resilience.

After all, if you can conquer a seemingly-insurmountable lift or have the strength to do a chin-up, you can do anything.

"There's a big mental side to it," she says. "I really feel like it's helped with my mental strength.

"When I'm in the gym and I'm doing those weights and trying to hit that next weight up, I really have to focus. I'm really in the moment which I think in itself is really positive.

"You need mental strength as well to have the confidence to try it and keep going. That's helped me in the rest of my life as well." 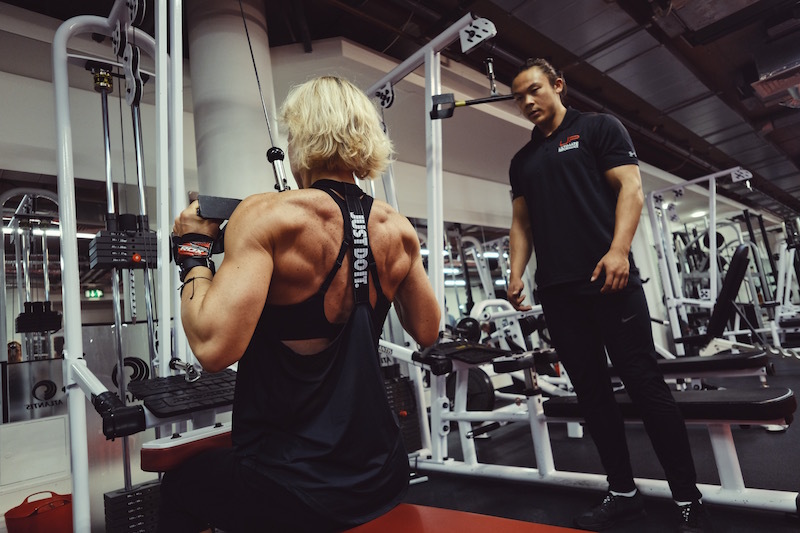 Before she started her transformation at UP, she feared it would negatively impact on her in the office where she leads a team.

But actually her new-found energy and positivity has meant it has had the exact opposite effect.

Rather than leaving the gym feeling tired, she says it actually meant she was set up for the day and feeling 'up for it'.

"A really, really unexpected benefit for me has been the improvement I've seen in my ability to focus at work. I feel like I'm achieving more.

"I feel like I'm more upbeat for the team that work for me. In fact, it has helped with work, it hasn't been a problem."

One surprising thing about the transformation process for Vicky was the weight training and how much she enjoyed getting stronger.

Having been someone who only did cardio to burn calories, it was eye-opening to see how effective resistance training could be for changing her body composition.

In terms of the training, I thought it was going to be tough and within no time I found I was really enjoying it," she says.

"Before I started, I was asked what my goals would, and I said 'one of my goals is that my whole life I've wanted to do a chin-up and I've never done close' and I've done these fitness holidays and tried one at the end and flatlined.

"To go from zero – and I really was at zero with a really unhealthy lifestyle – to be able to do chin-ups in 17 weeks – I'm really blown away."

Vicky's transformation is outstanding in every way – and her efforts have not gone unnoticed by friends, family and work colleague who have seen a what a difference her 20 weeks at UP have made.

"What's been amazing is friends saying to me 'you're a real inspiration to me' and I didn't think this was possible.

"I've noticed other people eating differently, making sure they do some exercise before work; there's a bit of a snowball effect.

"When you do something it has a positive effect on the people around you.

If you want to achieve results like Vicky, find out about our Personal Training Plans or BOOK A CONSULT NOW! 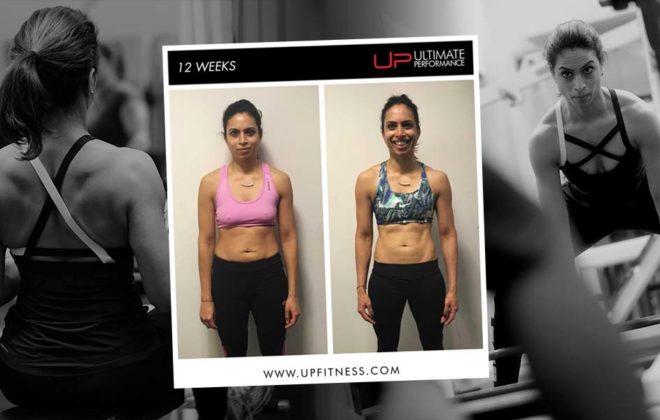 Fitness Saved Shaneeta After The Death of Her Father 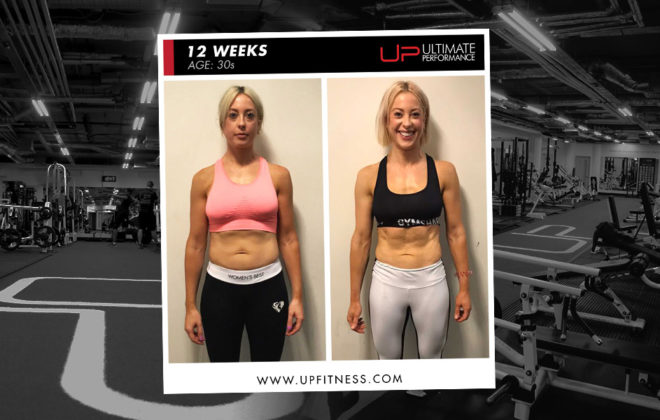 Olivia Trained 3 Hours a Week to Sculpt Her New Body 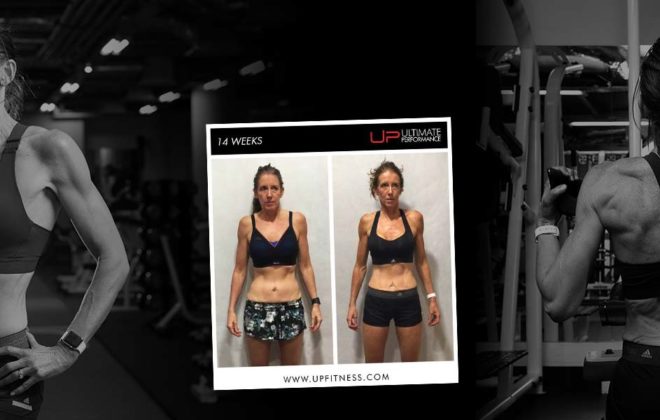